Bollinger Bands (BB) are a widely popular technical analysis instrument created by John Bollinger in the early 1980’s. Bollinger Bands consist of a band of three lines which are plotted in relation to security prices. The line in the middle is usually a Simple Moving Average (SMA) set to a period of 20 days (The type of trend line and period can be changed by the trader; however a 20 day moving average is by far the most popular). The SMA then serves as a base for the Upper and Lower Bands. The Upper and Lower Bands are used as a way to measure volatility by observing the relationship between the Bands and price. Typically the Upper and Lower Bands are set to two standard deviations away from the SMA (The Middle Line); however the number of standard deviations can also be adjusted by the trader.

Bollinger Bands (BB) were created in the early 1980’s by financial trader, analyst and teacher John Bollinger. The indicator filled a need to visualize changes in volatility which is of course dynamic, however at the time of the Bollinger Band’s creation, volatility was seen as static.

There are three bands when using Bollinger Bands

One thing that must be understood about Bollinger Bands is that they provide a relative definition of high and low. Prices are almost always within the band. Therefore, when prices move up near the upper band or even break through the upper band, many traders would see that security as being overbought. This would preset a possible selling opportunity. Of course the opposite would also be true. When prices move down near the lower band or even break through the lower band, that security may be seen as oversold and a buying opportunity may be at hand.

Cycling Between Expansion and Contraction

Volatility can generally be seen as a cycle. Typically periods of time with low volatility and steady or sideways prices (known as contraction) are followed by period of expansion. Expansion is a period of time characterized by high volatility and moving prices. Periods of expansion are then generally followed by periods of contraction. It is a cycle in which traders can be better prepared to navigate by using Bollinger Bands because of the indicators ability to monitor ever changing volatility.

In order for the Bollinger Bands to confirm the W-Bottom’s existence, the following four conditions must take place.

Of course, just like with any indicator, there are exceptions to every rule and plenty of examples where what is expected to happen, does not happen. Previously, it was mentioned that price breaking above the Upper Band or breaking below the Lower band could signify a selling or buying opportunity respectively. However this is not always the case. “Walking the Bands” can occur in either a strong uptrend or a strong downtrend.

During a strong uptrend, there may be repeated instances of price touching or breaking through the Upper Band. Each time that this occurs, it is not a sell signal, it is a result of the overall strength of the move.

Likewise during a strong downtrend there may be repeated instances of price touching or breaking through the Lower Band. Each time that this occurs, it is not a buy signal, it is a result of the overall strength of the move.

Keep in mind that instances of “Walking the Bands” will only occur in strong, defined uptrends or downtrends.

Bollinger Bands have now been around for three decades and are still one of the most popular technical analysis indicators on the market. That really says a lot about their usefulness and effectiveness. When used properly and in the proper perspective, Bollinger Bands can give a trader great insight into one of the greatest areas of importance which is shifts in volatility. Traders should of course be aware that Bollinger Bands are not unlike any other indicator in the sense that they are not perfect. A shift in volatility does not always mean the same thing. Knowledge of the causes of these things comes from experimentation and a great deal of experience. Bollinger Bands should be used in conjunction with additional indicators or methods in order to get a better understanding of the ever changing landscape of the market. Ultimately the more pieces of the puzzle that are put together, the more confidence should be instilled in the trader. 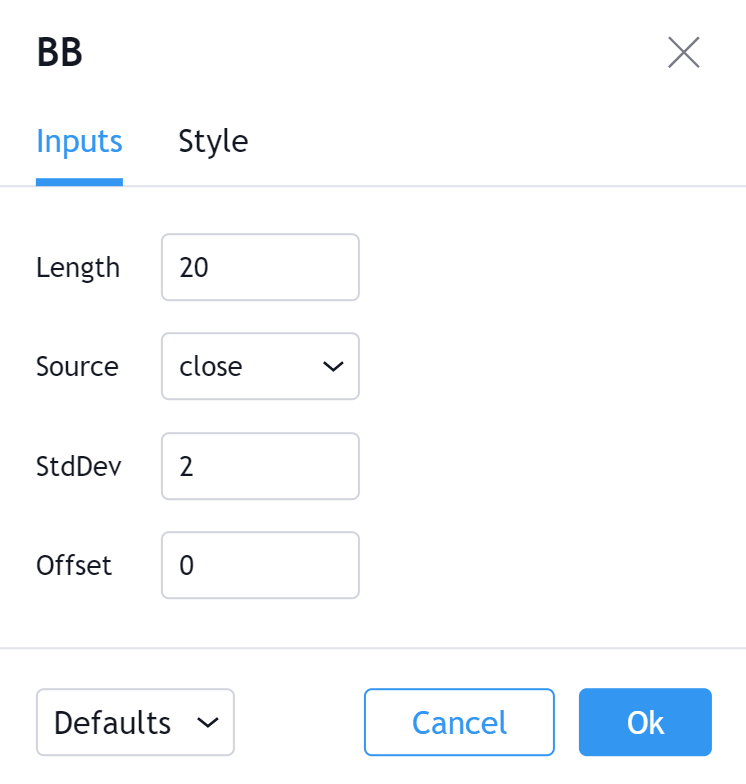 The time period to be used in calculating the SMA which creates the base for the Upper and Lower Bands. 20 days is the default.

The number of Standard Deviations away from the SMA that the Upper and Lower Bands should be. 2 is the default.

Changing this number will move the Bollinger Bands either Forwards or Backwards relative to the current market. 0 is the default. 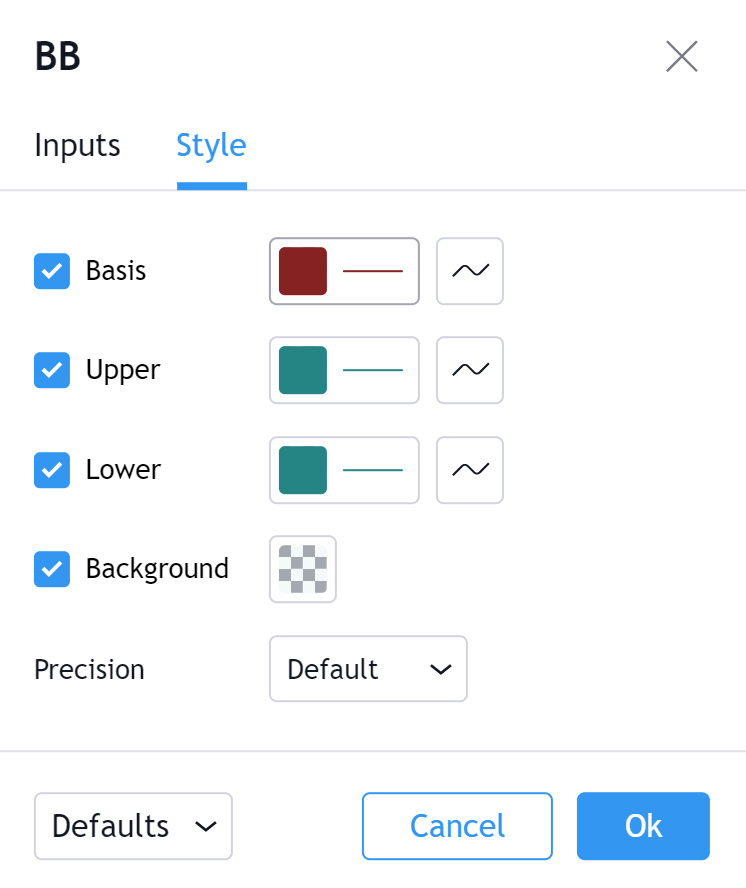